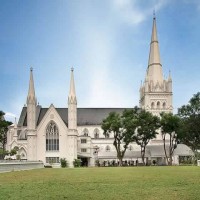 St Andrew’s Cathedral is the largest Cathedral in Singapore. St Andrew’s is Singapore’s oldest Anglican Church and the main church of the Anglican Diocese of Singapore. It was named after the patron saint of Scotland, because the original church was funded by Scottish traders.